The Birth of Reese

The Birth of Reese 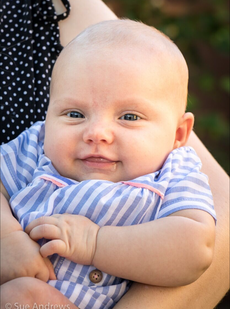 I was 41 weeks pregnant and was feeling very eager and impatient for the labor process to begin.  On Thursday, July 6, I lost my mucus plug.  Several hours later, the early hours of Friday morning, I was awakened with some contractions that persisted until 10a…  I decided to go into work because I had felt contractions at this intensity before, and they had turned out to be Braxton Hicks.  I left work around noon because I wasn’t feeling myself and my supervisor was concerned about the potential of me going into labor.

Once I got home, I took a nap and woke around 2 pm.  By 3, my contractions started again.  I wanted to stay moving, but it was 101 degrees outside, far too hot for a walk, so I decided to go to the mall to walk around.  As I walked, contractions got more intense, so after an hour I decided it was a good idea to go home and ask my husband to leave work.  I cooked a nice dinner so I would have strength if this turned out to be labor.  We called Susanna to notify her and she instructed us to call when my contractions were more consistent.

After dinner, I decided to try to relax and to get some sleep.  My husband started a movie and we cuddled up in bed.  About half way through the movie, my contractions started to get painful and I was unable to sleep.   In fact, staying still, sitting, or lying down made the pain so much worse.  The only way I could get relief was from walking, bouncing on an exercise ball, or getting on all fours.  Knowing I was in labor and this was going to be a long night, I continued to try to get some sleep between contractions; however, sitting or lying made the pain excruciating; making sleep impossible.

It was also very difficult for us to gauge how far into labor I was because the time between my contractions was very inconsistent.  I would have one contraction 3 minutes apart, another 10 minutes apart, another 5 minutes apart, etc.  The intensity was also quite variable.  I was worried that I was still in early labor so I didn’t want to have Susanna come too soon and have nothing to do.  My spirits were waning, so around midnight, my husband called my mom to come and help out.  After midnight, time was such a blur.  I was so withdrawn, only able to focus on managing the pain that time seemed to disappear completely.  I was in such a fog that even my memory of my birth process feels a bit blurry and I am uncertain of the order of the events.

After my mom arrived, she helped for a while and then got concerned that I was getting far into my labor and needed Susanna to be present.  Because the time between my contractions continued to be so sporadic and all over the place, I was hesitant to request Susanna’s presence since I believed I was still in early labor.  After my mom and husband insisted, I asked Susanna to come over. 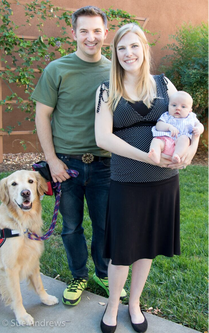 Once Susanna arrived, she checked my cervix and reported that I was 8.5 cm dilated.  It seemed that things were really moving fast.  She called the other midwife to assist and my husband got in gear to fill the birth pool.  After it was full, I got in and the water was absolutely amazing!  It seemed to cut the pain of my contractions in half.  I was so relaxed spending time in the water.  My labor started slowing down and I developed a cervical lip, necessitating my departure from the pool to labor with the assistance of gravity.  I was disappointed to leave the pool, as I had hoped to have a water birth.  I labored while lunging, on a birth stool, while walking, on the toilet, and on the bed.  Susanna then encouraged me to labor in the shower with my husband.  The sensation of the water pressure and the confined space really bothered me.  I exited the shower.  Susanna then suggested I go to the bed where I labored in different positions to try to get rid of the lip.  Eventually, the lip resolved and I was 10 Cm dilated.  By that point, it felt like I was laboring forever!   I was in so much pain and was so exhausted, that I doubted my ability to continue and feared pushing because I was terrified that it was going to hurt so much worse.  Emotionally, I fell apart completely and was cursing my decision to have a baby without pain management drugs.  I think I might have even asked to be taken to the hospital.

Susanna talked to me just in the way I needed to get me through that inner struggle.  She used a firm but kind tone with me.  She shared her birth story with me, which helped me to stop judging myself for my feelings and soothed my emotional struggle dealing with the pain.   She walked me through guided imagery.  Both of these interventions helped me calm down and placed me in a mindset that gave me the energy to complete my birth.

I never felt a strong urge to push, like was described by our labor coach or my friends.  So Susanna suggested that I just give it a try.  She had me pushing from different angles.  I pushed for about two hours and then tried pushing on the birth stool so gravity would help the baby exit.  My husband held me from behind while Susanna sat in a position to catch the baby.  I pushed several times and the baby seemed to fly out of me with incredible force.  Susanna caught her.  Our baby Reese was born at 11:25 a.m. on 7/8.  She was crying the first 5-10 minutes of life.  Susanna immediately handed her to me.  I was concerned that I would drop her as she was wet and Susanna assured me that I was not going to drop my baby and wrapped her in a blanket and handed her back to me.  After I delivered the placenta and my husband cut the umbilical cord, we laid in bed.  I got to cuddle with Reese and fed her for the first time.  Susanna explained how to breastfeed.  Everyone left the room and my husband, baby, and I had our first moments alone together as a family… our bonding time.

Susanna stayed with me for hours after the birth.  This was invaluable to me because I was exhausted after giving birth.  I really needed someone who would take on a leadership role, help guide me, and be a voice of reason and encouragement.  Susanna fulfilled all of these roles for me.  She intuitively knew what I needed without me having to ask, which is a good thing.  During this process, I really struggled to effectively articulate my needs.

Giving birth was by far the most challenging but rewarding experience of my life.  I feel very fortunate that my birth experience was, in large part, uncomplicated and I was able to have my home birth.  Susanna was such an amazing guide, mentor, and friend throughout this life-changing process.  I wouldn’t have wanted my birth experience any other way.